In Part 1, I threw out some ideas on how to have less morning crazy and capture the elusive “stress free mornings” dream from your hair-sprayed, Vaseline-edged, pre-computer-generated-wobbly-edged-80’s-fantasy scene.

If you didn’t get a chance to read that post, I’d start there.

Or you could go out of order. Whatever.

Hey, am I the only one who answered questions randomly instead of consecutively when taking elementary school math quizzes? Those quizzes were so monotonous.

Not so great for my grade, the random thing. More often than not, I’d get distracted and miss questions. Still…less boring …yeah, worth it.

So go ahead, read this one first with my blessing. Just don’t get distracted and forget Part 1.

But if you did come here from Part 1 (such a good doobie), you’re probably ready to kick school morning butt.

The kids are up, you’re up (might I say,  looking gorgeous), shoes are on, Oreos and happiness abound, and your car doesn’t reek of stinky breath.

So how do you take it to the next level?

I Could Probably Live In My Car. Wait, Would I Be Alone? Could I?!

Set up your house and car for success. Even if it’s unconventional.

Then when it’s go time and you realize your teen never returned the key he borrowed, or you know it’s in your coat pocket but you just can’t remember which coat, grab the extra and deal with finding key #1 later.

In other words, when something isn’t working, fix it.

If conventional doesn’t work, be unconventional. I mean, you’re weird anyway, might as well use it for good.

And, finally, now for the least popular tip that I purposely saved for last in case it makes you bounce off this post right now. It’s up there in unpopularity with “do a bunch of stuff the night before.”

I said I know!

This is so hard for me. But somehow, when I do it, mornings are miraculously just…better.

This just about sums it up.

Just enough time to splash cold water on your face and get human(ish) before you wake up the kids.

I totally get how hard this is, especially with kids who won’t sleep. The snooze button is an invention right up there with Chocolate Fudge Magic Shell.*****

I’m a die-hard night person who despises getting up earlier than necessary. 15 minutes can feel like a lot. But if mornings are rough at your house, this could be the magic pill (not the same kind of magic as magic shell – that is just sheer wizardry).

And 15 undistracted minutes allows me to get ready in one fell swoop instead of in fits and starts between badger sessions, losing my place and restarting the humanization process each time.

And bonus – not glimpsing myself in the rearview mirror on the way to the school and realizing I forgot to address my entire facial area.

One warning – the 15 minutes are to get ahead,  not check social media. More than once, I’ve ended up behind because I thought I was ahead.

Plenty of time to view everyone else’s perfect lives and hate yourself later.

SAY IT WITH ME, BOYS AND GIRLS 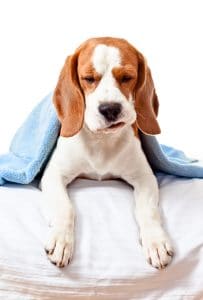 Is it me, or does this dog look like Frank on Shameless?

They just do. For everyone involved.

It’s impossible to anticipate and prevent every morning atrocity. But try to:

…you’re more likely to handle each situation without it escalating into catastrophic levels.

After all, now you’re not:

I’m not gonna lie here. In the end, you still may not be basking in sunlight while sipping premium coffee.

But won’t your McD’s car pastry be that much more enjoyable****** when you don’t need to call Dr. Laura yourself to admit your 7-year-old thinks he was listed on adoption.org and his new parents will be waiting for him after school?

Rough morning or not, that may have been a bit harsh.

Instead, with a little effort, you can enjoy that nasty but delicious confection guilt-free (except for the, you know, guilt of eating it in the first place).

P.S. Don’t forget Part 1 on how to have stress free mornings!

*And you don’t have concerns about younger children getting into them.

**Be careful if you have a high schooler who borrows your car – this could be a major problem if he has meds in the car!

****Still waiting on results from that maternity test.

If this post helped you, I’d love and appreciate it if you saved it to your Pinterest boards for later and so others can see it! 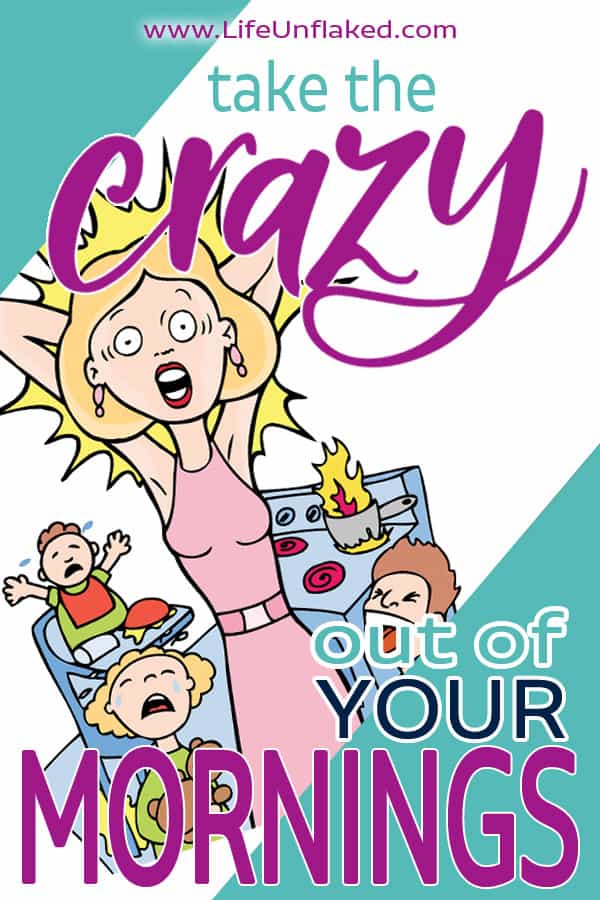 I'm Joni, a somewhat scatterbrained mom of 3. I believe organizing isn't the end goal in itself - it's a tool to get you to the good stuff without pulling your hair out. Because I tend to step left when I'm supposed to step right (usually not on purpose, it just kinda happens), I've figured out lots of workarounds to help me get out of my own way. Whether you are ADHD or not, if organizing doesn't come easy, maybe I can help. Let's do this together. More about me...

This website uses cookies to improve your experience while you navigate through the website. Out of these, the cookies that are categorized as necessary are stored on your browser as they are essential for the working of basic functionalities of the website. We also use third-party cookies that help us analyze and understand how you use this website. These cookies will be stored in your browser only with your consent. You also have the option to opt-out of these cookies. But opting out of some of these cookies may affect your browsing experience.
Necessary Always Enabled
Necessary cookies are absolutely essential for the website to function properly. This category only includes cookies that ensures basic functionalities and security features of the website. These cookies do not store any personal information.
Non-necessary
Any cookies that may not be particularly necessary for the website to function and is used specifically to collect user personal data via analytics, ads, other embedded contents are termed as non-necessary cookies. It is mandatory to procure user consent prior to running these cookies on your website.
SAVE & ACCEPT